Saved Searches Advanced Search
All library buildings remain closed. Visit an outdoor Express Pickup location when your holds are ready - appointments available but not required.
It may take up to a week for returned items to clear from your account due to the COVID-19 quarantine period.
Print 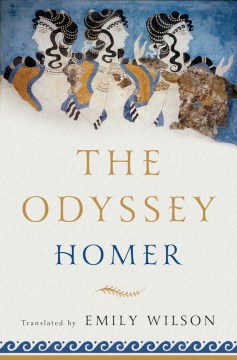 Nothing short of a masterpiece. The ultimate hero's tale.

This translation made reading the Odyssey a joy!

It's always interesting, when entering into a book you've never read before, to see a book defy your expectations. I've read epic poetry before, but none like this, and now I see why THE ODYSSEY is so often considered the backbone of western literature. The reason is how it feels so incredibly modern, despite its age, and this is testimony to the fact that storytelling hasn't changed; what made for a good tale in the days of Homer (assuming a man named Homer even existed), still makes for a good tale in the modern world.

THE ODYSSEY has everything: swashbuckling, adventure, humor, and even copious amounts of gore. This last detail was perhaps the most surprising for me. At every turn someone is disemboweled, beheaded, or tortured, and the verbal descriptions of these deaths are always vivid. At times I felt like I was reading a novel as written by Quentin Tarantino. I would say, however, the violence, while impactful and gory and descriptive, is never vulgar or upsetting or repugnant. That said, it is colorful and graphic.

I don't particularly like Odysseus, but he is very heroic in the Greek sense of the word: he's intelligent and ruthless, and the gods favor his every move. But his journey is one worthy of your time, I think, and the translation I read (the Penguin Classics Deluxe Edition, translated by Robert Fagles, on Kindle) was engaging and colorful and readable. There were plenty of notes throughout the book, serving to explain details to the reader which would have been obvious to the original audience. In this way, the book is allowed to come to life, and come to life it does.

world wanderer who lost his way and wife

Absolutely epic. You follow Odysseus (also called Ulysses) as he tries to make his way back to home and family after fighting in the Trojan War. This story was passed down in the oral tradition of storytelling, and is full of adventures, gods and goddesses, monsters, losses and intrigue. Required reading in some high school and college courses (I had to read it for more than one college class). Highly recommended and easily readable. Five stars.

The translation I picked maybe the latest. Simple concise but not plain, gave me space to roam the imaginary, in vocal enchantment.
Such experience was eclipsed by my concurrent read of American Ulysses (Grant’s biography). Mighty mythical saga indulged me with fantasy, in Odysseus heroic journey blessed by capricious Athena, I envision full display of mortal weaknesses, till the final vengeful slaughter with little wonder to exhilarate, left me numb to repulsion.
I may read Fagles’ translation in the future.

I had read The Odyssey in college, but that was longer ago than it took Odysseus to make his way home after the Trojan war. Loved this version of the book. Liked the fact that it was translated by a woman. Loved the translator's summaries and notes. Loved the introduction. I couldn't finish the book before I had to return it to the library, so I went and bought my own copy of it. I plan to pass it on as a gift to my son.

Reading this spectacular saga reminded me once again why I love long-winded outrageous yarns. Surely this has to be the tall tale to top them all! No wonder parts of it have become the basis for countless films, operas, essays, poems over the centuries. Completely engrossing; and this translation is wonderful.
Living in the western world it's impossible not to be exposed to some or many of the elements of this story in one form or another and I had paid several less than heroic visits in the past, stopping off at various ports along the way, led by a succession of troubadours beginning with Chapman taking up Homer's tale; but I had never finished the entire journey. None of those interpreters struck me as having captured the true spirit of the age or fleshed out Odysseus' persona as I had hoped. This time, I was happily swept along with Mr. Eagles all the way back to Ithaca. He captured the spirit and rhythm of the tale so well that I was at times tempted to rise out of my silent chair to declaim passages aloud; surely a great achievement when translating from ancient Greek to modern vernacular English.
One is reminded at times that this began as an oral tale, more or less formally set in regular hexameter; accordingly, there are passages that repeat, almost like a refrain punctuating episodes in a long ballad. Far from holding up the progression as one might expect, these interludes serve to raise the tale off the printed page into the immediacy of a verbal performance. All it needed for full effect was the strumming of a lyre and the smell of the wine-dark sea.

I love everything about this translation, and Wilson's introduction and author's note to the text are some of the most fascinating and thoughtful pieces of literary analysis I've read in ages.

Frightening or Intense Scenes: Lots of scary stuff happens in The Odyssey -- it's a Greek epic poem after all...

Violence: The Odyssey has violence! (Especially chapter 22, when the suiters are killed, is very gruesome!)

Leaving the war in Troy, Odysseus travels through many adventures on the sea as he tries to get home against Poseidon's will.

Starts with Odysseus in the clutches of Calypso and interestingly half the story is told in a flashback mode . Probably the first time that the flashback concept was ever used . This is the story of a man who is try to return home from the Trojan war and is unable to get home to his loyal wife and son because the gods constantly set obstacles in his path. One has to wonder if Homer intended to depict his gods as separate entities who were controlling human destinies or were they intended to be metaphorical i.e when Athena makes Odysseus look larger , is that hinting at the fact that Odysseus felt courage surging through his heart and hence looked larger than life or was Athena doing that . It seems that these issues crop up all over the Iliad as well as the Odyssey .

readingfairy1 thinks this title is suitable for 11 years and over

obsidianlily thinks this title is suitable for 13 years and over

There are no quotes for this title yet.