Saved Searches Advanced Search
Visit one of our Express Pickup locations when your holds are ready. Save time by making an appointment.
It may take up to a week for returned items to clear from your account due to the COVID-19 quarantine period.
Print 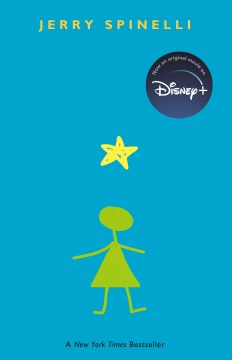 High school can be brutal, you guys. Especially for those who are bravely, unapologetically themselves. Case in point - Stargirl. Can she herself even endure the wrath of the popular kids? I fell in love with this book. I hope the new movies does her justice.

This was such a good book! The characters are so magical, but real enough that you can relate to them. I'd give this book ten stars if there weren't only five. AMAZING!!!!

I loved Stargirl, both the book in general and Stargirl herself. It's so well written, and I loved how the story is told in Leo's voice, even though the focus is on Stargirl. This book is so good, I almost felt like I was in it! Please read this book!

I read Stargirl on a recommendation from my tweener and was enraptured. This book is clearly targeted to young teens, but its message of kindness, tolerance and self-love, expressing individuality despite the social pressures to conform, can speak to everyone. I wish I could have read this when I was growing up and experiencing adolescent angst - perhaps I would have been more compassionate to both others and myself. I'm glad youth have books like this and Wonder to turn to now, as our increasingly "connected" society seems to need messages like this more than ever.

Stargirl is a teenage novel written by Jerry Spinelli that mainly focuses on individuality. Today's society is all about fitting in with everyone else, but the thought of being unique is rarely ever considered. Everyone is always willing to impress one another and are always caring about their appearances and what people will think and say about them. This is what degrades self-care and self-love. What really matters is someone's personality and being in general. This novel represents the importance of conformity and individuality. The meaningfulness behind this beautiful literature is loudly spoken through Jerry's use of words. Overall, the author is willing to indicate that everyone should be their selves and be comfortable and happy with who they are. Being unique is fun and stress-free and everyone should try to be different and stand out. I would give this novel a rating of 5/5 and would definitely recommend it to anyone who feels they have to change to fit in. @Bookland of the Teen Review Board at the Hamilton Public Library

Love this book, I think the big message in this book is not to follow the crowd and be yourself!

Stargirl is one-of-kind. She's caring, loving and not afraid to be herself. But she is also naviete about the pressures in society to conform. What happens when we are our true selves and what happens when we are not? Who are memorable people from your past? I enjoyed pondering these questions while listening to the audiobook of Stargirl.

This was one of the most influential books of my childhood.

This story was challenging and heartwarming. I want to be like Stargirl...even though it's easier to be like Leo. I liked Leo a lot, and I love how he changed because of Stargirl. She made a lasting impact.

Her only crime was giving too much love.

This one of my favorite kids’ books, and one of the few books that made me shed more than a few tears. I’ve also seen it have a positive effect on middle- and high school students. I read it as an adult, and wish I’d read it forty years ago.

Basically, it’s a tale of nonconformity, and it’s a simple little “slice of life” story. Beneath that, the reader is taken on a journey of discovery of their own attitudes and preconceptions as the narrator Leo discovers this strange person who calls herself “Stargirl”. Besides being “realistic fiction”, this is also fairy-tale (is she an Elvish princess? A fairy goddaughter? A younger version of Giselle in Disney’s “Enchanted”?); this is an allegory (is she Jesus? The trial, crucifixion, and resurrection are all figuratively there, with some other hints – there are even characters corresponding to Peter and Mary Magdalene); this is a myth (is she the “spider woman” of Campbell’s monomyth?), and this is a classical tragedy (is Leo his own undoing?). At the climax, when this dream has become a nightmare and the reader is angry with poor Leo (who in turn is angry with himself and out in the desert alone, fuming), the unthinkable happens. “The ice shatters” and the whole story is turned on its head (Tolkien’s “eucatastrophe” on a smaller scale); we readers realize – well, yes, right: nothing else could possibly have taken place.

There. Hope that didn’t have too many spoilers. An adult can read it in a couple of hours; do so before the movie comes out, supposedly in the next couple of years (2018 or 19).

vaasu thinks this title is suitable for 13 years and over

LizzieJoy thinks this title is suitable for 11 years and over

ArapahoeTina thinks this title is suitable for 10 years and over

thevales thinks this title is suitable for 10 years and over

RobertELPL thinks this title is suitable for 13 years and over

lynx_girl thinks this title is suitable for All Ages

Bookworm_152 thinks this title is suitable for 11 years and over

Love_Legolas_111 thinks this title is suitable for 13 years and over

“When a Stargirl cries, she sheds not tears but light.” ...

"When a stargirl cries, she sheds not tears but light."

Since September, she had been a performer-unique and outrageous-on the high school stage. She was the opposite of cool; she held nothing back.

For years the strangers among us had passed sullenly in the hallways; now we looked, we nodded, we smiled. If someone got an A, others celebrated, too. If someone sprained an ankle, others felt the pain. We discovered the color of each other's eyes.
It was a rebellion she led, a rebellion for rather than against. For ourselves. For the dormant mud frogs we had been so long.

On the contrary, she [Stargirl] is one of us. Most decidedly. She is us more than we are us. She is, I think, who we really are. Or were.

"She was bendable light: she shone around every corner of my day.

“Heart and head are contrary historians.”

“When a stargirl cries, she sheds not tears but light.”
― Jerry Spinelli, Stargirl

“You’ll know her more by your questions than by her answers. Keep looking at her long enough. One day you might see someone you know.”
― Jerry Spinelli, Stargirl

Stargirl, who up till now has been homeschooled, starts school at Mica High as a tenth grader, where Leo is starting his eleventh-grade year. Stargirl's entrance to the school is a Big Deal for all the students in this small Arizona town. She immediately starts a stir with her wacky outfits and even more wacky behaviour

Stargirl, the strange new girl, and Leo, become girlfriend and boyfriend. Leo is awed by how Stargirl can ignore the teasing of their classmates. Leo soon finds himself in love with Stargirl and, but they are finding that the whispering of their classmates is getting worse and worse. Leo wants Stargirl to be normal. One day Stargirl comes to school and she is dressed normally. She looks like a normal teenager. Leo is proud of her but Stargirl is no longer happy. Can Leo and Stargirl fix their relationship? Or will it crumble like Stargirl's popularity if she changes back? Stargirl loves Leo, but what if he can't love her back for who she is?

Stargirl is narrated by Leo Borlock, an eleventh grader who is content to conform to his close-minded high school environment. Leo and his entire high school are jolted out of their comfortable, conventional existence by the arrival of Stargirl Caraway, an unapologetically unique student who has been homeschooled and is now attending high school for the first time. For the first half of the school year, Leo observes Stargirl and her classmates’ reactions to her odd behavior. The students first regard Stargirl with suspicion and are afraid to socialize with her. As time passes, some of the students fall under Stargirl’s spell and become more individual and open-minded themselves; however, by February of the school year, the students have all come together to express their distrust of Stargirl. When Stargirl refuses to conform to their standards, they ultimately see her as a threat to the community.

A striking young woman who does just as she pleases causes an uproar when she joins a local high school. The student body, previously a fairly homogenous group of teens, doesn't know whether to react to her with respect and attraction or revulsion. One young man in particular finds himself torn between really liking her and all her eccentricities, and having a hard time dealing with how she alienates people because of her differences.

Everything about Mica High School is normal, until a homeschooled girl, named Stargirl, begins attending here for her sophomore year. Stargirl is a rather unique girl. She goes around the cafeteria playing a ukulele, she carries around a rat, she even gives little gifts and cards to people she doesn't even know. When she first comes to the school, people love her. The boys in school are struck by her beauty. The girls are both jealous and excited to have her. When Stargirl takes an interest in a young man, Leo Borlock, he's full of excitement and anxiety that he could possibly be falling in love with such an interesting girl. He also wants to feature her on his school television show - Hot Seat.

The students come to love her individuality, enthusiasm, and her silliness. She quickly becomes popular, till her determination to bring happiness to everyone changes everyone's opinion about her. Suddenly, Stargirl isn't the popular girl that everyone enjoyed. The students start to question her differences, and she is soon rejected by almost everyone in the school, except for Leo, who falls in love with her, and - now Stargirl's only friend - Dori Dilson. Stargirl and Leo are having a great relationship till something wants to change his mind. Leo may not be strong enough to make the right decision.

Stargirl is a truly inspiring story. Jerry Spinelli made a book that many can relate to. Many students and people today want to try to fit in, but the character Stargirl proves it's okay to be different. Stargirl teaches you to be yourself. You will be drawn into the story, as you can see yourself in several of the situations encountered in Stargirl.

Leo Borlock is like any other teenager in highschool. But when he comes face to face with the new outcast Stargirl Caraway, Leo's life is changed forever by love. But will that love be strong enough to stop Leo from wanting to be normal.

There are no notices for this title yet.