Saved Searches Advanced Search
It may take up to 4 days for returned items to clear from your account due to the COVID-19 quarantine period.
All library buildings remain closed. When your holds are ready, make an appointment at your Express Pickup location.
Print 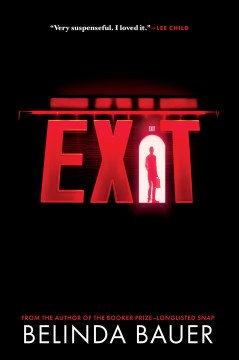 EXIT is a quirky, twisty mystery novel. From the get-go the reader never quite knows in which direction the plot is going - and that’s a good thing! The protagonist, Felix Pink, is a fuss-pot widower who, despite his best intentions, is embroiled in murder most foul. However, events have an upside of bringing him out of himself and setting him on a new road towards self-realization and fulfilment. As the story unfolds, other characters are drawn in and either realize or completely miss out on positive life-changing events presented to them as this mystery unfolds. Fun and thought-provoking from beginning to end. Loved it!

This is the story of how one simple mistake alters the lives of a handful of residents in the small village of Bideford. The cast is a mixture of decent folk & quirky oddballs who all weigh in as the book progresses. But the 2 main narrators are Felix Pink & PC Calvin Bridge.

Felix is a 75 year old widower. He lives a quiet, orderly life & has always played by the rules. After watching his wife lose a slow battle with dementia, Felix became an Exiteer…..one of a small group who witness the death of those who have chosen to end their suffering with assisted suicide. They work in pairs & for his next assignment, Felix is accompanied by new recruit Amanda.

They travel to the home of Charles Cann, an elderly man with cancer. One look & Felix knows it will be a short visit. In fact, he’s more worried about Amanda. Ah well, the first time is always the toughest. All they have to do is sit there so really, what could go wrong? Oh ye Gods, where to start…

In the blink of an eye, Felix goes from upstanding citizen to man on the run. Worse yet, someone called the cops which brings PC Calvin Bridge to the Cann residence.

Calvin is a 27 year old guy who is trying to remember why he became a cop. After a brief stint as a detective under DCI Kirsty King, he’s happy to be back in uniform & patrolling the streets. He knows the local criminal element well so when he gets a call about a home invasion, he figures he’ll have it solved by tea time. And he might have…if only he hadn’t found a body.

This is one of those reads where you should go in knowing as little as possible about the plot so I’ll quit while I’m ahead. But what you’ll find is a story that is just as much about the characters as who-dun-it. Compared to the author’s previous book, this is a slower paced tale full of warmth, humour & surprising twists.

It all kicks off with the body. Then we meet the cast & learn of the events & people that have shaped their lives. The MC’s are 2 men at very different stages but as the story progresses, both begin to reflect on the choices they’ve made. I particularly enjoyed Felix’s journey. When we first meet, he’s a man who is awaiting his own demise as he helps others on their way. But a funny thing happens as events spin out of control. He’s not allowed to passively stand by & is forced to participate in his life.

Bauer excels at characterization & with just a few sentences, even minor characters jump off the page. The dialogue is sharp & economical & as the pace picks up in the second half, it becomes an entertaining mix of mayhem & misunderstandings as characters race to either find or avoid each other.

It’s much more than a cleverly constructed murder mystery. Interspersed with devious twists & wry humour are moments that are poignant & all too familiar for those of us with elderly family members. Through Felix & Charles, we feel the heartache of losing someone bit by bit & frustration over the small things we gradually surrender with age. Multiple story lines eventually intersect & there are plenty of surprises in store. The ending brings the story full circle & I thought it was perfect. Wishing you red skies every night, Skipper.

There are no ages for this title yet.

There are no summaries for this title yet.

There are no notices for this title yet.

There are no quotes for this title yet.